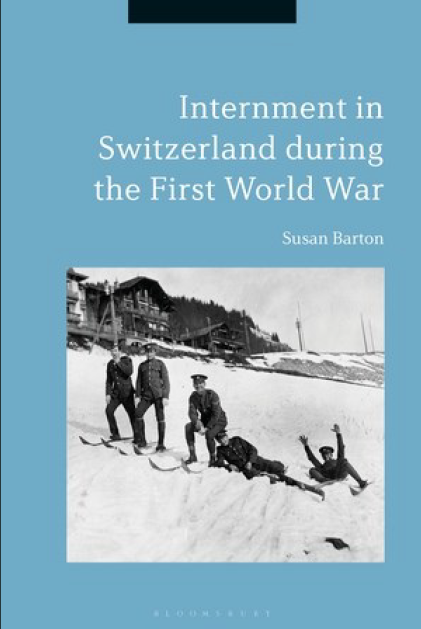 You are warmly invited to hear
Dr. Susan Barton talking about
her recently published book on:

In contrast to the plethora of work focussing on the tragic loss of human lives during the First World War, little is known about the more hopeful realities of thousands of sick or wounded prisoners of war from Britain, France, Germany and Belgium who were sent to Switzerland from 1916. This new book explores the everyday lives of those interned prisoners and their impact on Switzerland.

As the internees arrived by train in Switzerland they were overwhelmed by the welcome and kindness of the Swiss who turned out to greet them at railway stations and showered them with flowers and gifts of chocolate, cigarettes and also useful items.

What surprises most people is the relative freedom enjoyed by internees. Those who could afford to do so could rent a chalet or apartment privately and have their families join them. For poorer soldiers, charities or collections back home paid for mothers, wives or fiancées to visit for a holiday. Many stories of courtship, weddings and new babies appear in the internees’ magazines.

Sport played an important role in internment life, as a pastime and as a means of rehabilitation of the injured. Football teams could travel to away matches, against other internees or Swiss teams such as Young Boys and Servette.

With  downhill ski pioneer, Arnold Lunn, as an instructor British internees in Mürren were the first to be taught and assessed using the new ski tests of the Ski Club of Great Britain. As well as sports clubs, theatricals and music offered escapism for both performers or audience. Work, education and training offered opportunities to learn new skills, especially important for the younger men or those whose disabilities meant they needed to learn new skills. The last of the internees, Germans in Western Switzerland, left for home in August 1919.

This is a First World War story like no other.

We look forward to seeing you on 10 September!

Copies of the book are available at the book launch or from: